You are here:
Publication 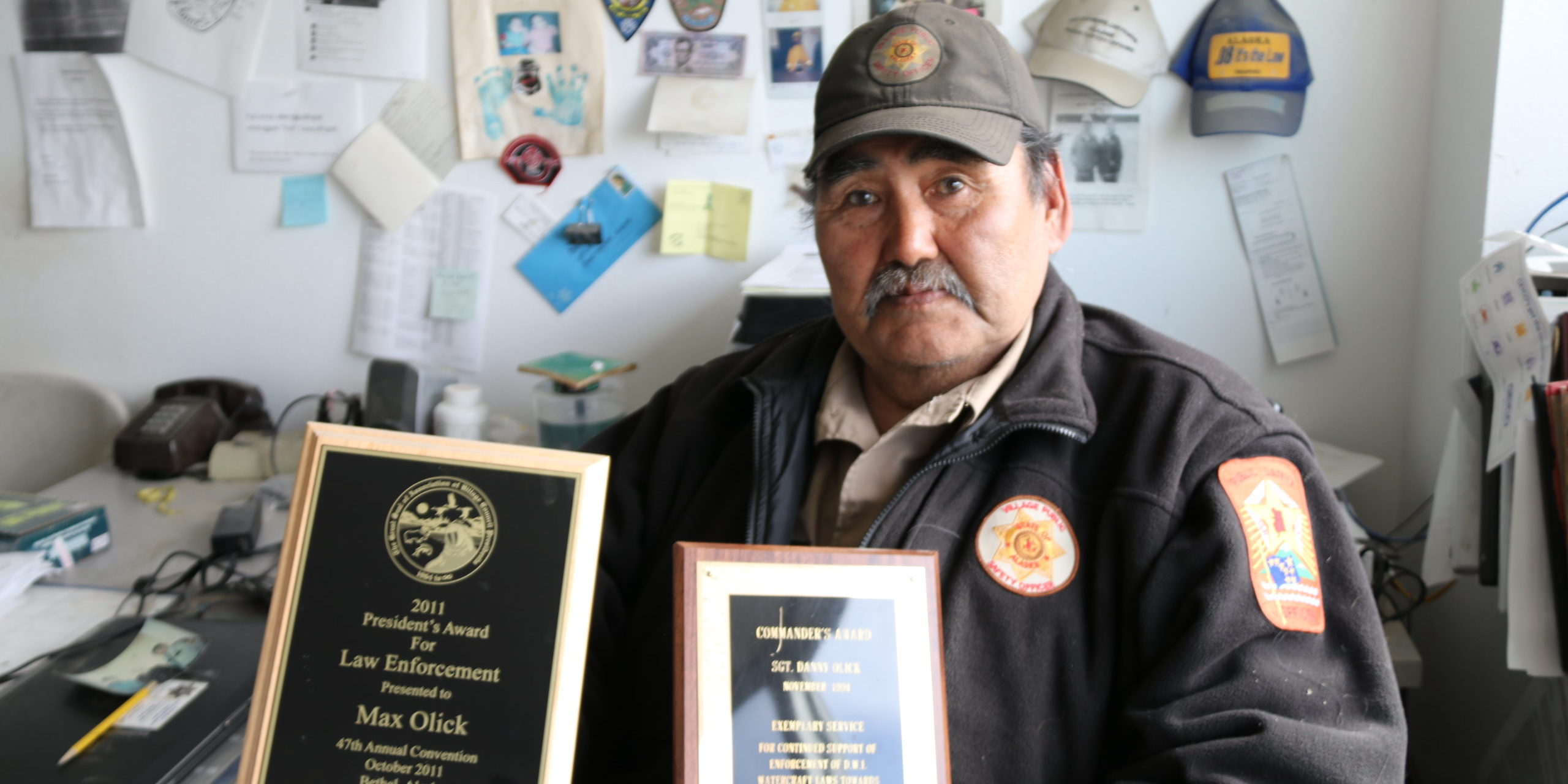 View the full document, by clicking HERE. The following is an excerpt.

Sgt. Daniel Max Olick reflects on 37 years, serving as a VPSO in Kwethluk, Alaska – the longest career in the history of the statewide VPSO Program

The Village Public Safety Officer Program began in the late 1970s to provide public safety at the local level, in rural Alaska. VPSOs are funded through the State of Alaska Department of Public Safety, through grants to nonprofit tribal organizations and one municipal government in rural Alaska. The VPSO program began in the Yukon-Kuskokwim Delta through the Association of Village Council Presidents (AVCP), a nonprofit tribal consortium of 56 tribes.

Sgt. Daniel Max Olick became an AVCP VPSO on May 4, 1983. He was one of the first VPSOs and holds the record for the longest running career as a VPSO in the State of Alaska and the history of the VPSO Program. He will have served his community, Kwethluk, Alaska, for 37 years, when he retires on Friday, May 15, 2020.

The following documents Max’s reflections upon retirement. It includes stories and observations from his childhood friend, Robert Nick; and his direct supervisor and fellow VPSO, Alvin B. Jimmie Sr., AVCP VPSO Coordinator.

“Thought I was invincible…”

Before becoming a VPSO, Max served as a Village Police Officer (VPO), employed by the City of Kwethluk, Alaska. The first person to encourage Max to become a VPSO was Susan Bell, an Alaska State Trooper. “She asked me if I wanted to give it a try,” says Max. “She mentioned that they pay was $6.00 to $7.00 an hour, and that was 1983, about this time of the year.” Max still has his first paystub.

“It’s like I was hired yesterday!” says Max. “The years go by so fast. And now I’m right here, ready to retire.”

Max went to VPSO training toward the end of 1983 for about three months. “I enjoyed it.” he says. “I was 20-something years-old back then. Thought I was invincible, you know.”

“When I first started working we had carbon copies…”

A lot has changed since Max went to training in the early 1980s. “When I first started working we had carbon copies, you know. One for the D.A., one for the Troopers, one for my records.” explains Max. “But you had to press hard, not to make any kind of mistakes.”

Now Max has two laptops: one for AVCP and one for the State of Alaska Department of Public Safety. “I’m one of the people that’s trying to keep up with technology: new phones, new computers, new ways of writing reports.” says Max. “Other VPSOs, that are very familiar with computers, don’t have a problem with that. By the time I got familiar with them… now I’m going to say ‘Bye. I’m not going to miss you!’” laughs Max.

“Mushing and drugs and alcohol do not match…”

Growing up in Kwethluk, Max’s father had a dog team. Max says, “One time or another… most of the people in the community used to have dogs… but like I said, technology came around. Snow machines came around. Four-wheelers came around. And only a handful have dog teams, here in Kwethluk.”

When Max came back home from high school, he says, “I found out we had not even one dog in the yard.” Max’s father had bought a new snow machine and had given the dogs to Max’s uncle. Max took some of the dogs and started raising them. 40 years later, Max has 16 running dogs, and a few pets. “I knew what I was getting into.” he says. “We didn’t’ do very good at first, but when we caught on, we got quite a few wins on our belt.”

Max encourages the younger generations to keep dog sled teams. “It’s not easy but, if somebody tries hard they can succeed… mushing and drugs and alcohol do not match, you know? They don’t mix.”

Max’s grandson won a race when he was just 14 or 15 years old. “They didn’t want him to race because he was too young,” says Max. “But the Kuskokwim-300 Board decided to let him run, and he won that race – 150-mile race. I was pretty proud of him.” Max’s son-in-law from Tuntutuliak won races four or five times. “That’s good enough for us.” says Max.

Together, Max and his wife have three girls and two boys. “They’ve got children of their own,” says Max. “We’ve got grandkids – maybe eight of them.”

Max says, “So we’ve got relatives all over, I guess. No matter where you go, you’ll find somebody that you’re related to, you know.”

Robert Nick is from Nunapitchuk, Alaska. When he was a child, his father would take the whole family on trips to Kwethluk (Max’s hometown) for church holidays and conferences. Robert explains that he has known Max since he was a youngster.

“I joke with him that he is finally retiring!” says Robert. “He was one of the first VPSO in the VPSO program. And he’s trained a lot of his fellow public safety coworkers.”

Robert explains: “As Iluqs we tease each other with no holds barred. So he [Max] teased me a lot and I’ve teased him a lot. So, when he had been a VPSO for quite of number of years, there was a movement in one… probably two villages… for a federal program – for a Federal Marshals program. And I used to – me and one of my cousins – we used to tease him, that he’s a ‘United States Marshal.’ So… *laughs*… he doesn’t like that, but we used to tease him a lot. A U.S. Marshal…”

The first search and rescue fiddling fundraiser “occurred in his [Max’s] home village [Kwethluk], trying to raise money for their searches.” says Robert. “Because, at the time, the State did not fund search and rescue… They started having these annual fiddling’s in Kwethluk, and in Bethel, to raise money for search and rescue. The Iluqs, they got him into a predicament there… *laughs*… They made him sing [karaoke]! A lot of the other VPSOs… they work closely together… a lot of friends that used to work as a VPSO.”

Robert remembers: “And one time [in winter], when I went to stop by Kwethluk – I was probably on my way home from either Akiak or Akiakchak – I stopped by to visit him [Max]. I saw his house, just a little ways from the school… His steam bath is right there where you drive up [from the river to the village]. He had a big pile of steam bath wood. And I asked, ‘who’s steam house is that?’, [at the place] where trucks drive up to the village. And they told me, ‘that’s Max Olick’s steam bath.’ And I said, ‘Oh, he’s got a lot of wood!’ (This guy was my Iluq too.) So I teased… (even though Max wasn’t there) I said, ‘Maybe I just drive down some time at night and load up my truck and then go home with some of those logs.’ But somehow word got to Max… (This guy told him I guess.) He said to Max, ‘You know, Nick was teasing that he was going to come down and take some of your wood.’ And Max told him to tell me, if he misses one log, he was going to have the Troopers arrest me! So, I didn’t need to because I had many logs myself, for steam baths, but there are many things that I’ve done with Max, many jokes that we do. He’s going to be missed in Kwethluk.”