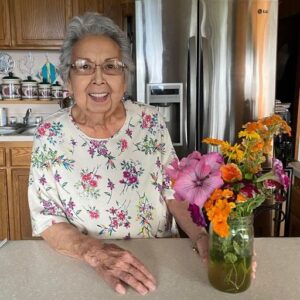 Bethel – The AVCP Executive Board and Staff offer condolences to the immediate and extended family of Bea Kristovich.

Bea was born in Napaimute and lived most of her life in Bethel. She was a leader for the Y-K Delta and devoted a lot of time to education and working to protect Native rights. Bea was a trailblazer. As the first woman to hold the position of AVCP Second Traditional Chief, she demonstrated to everyone what is possible for our Tribes and Tribal organizations. She always thought about the region’s people first and tried to help everyone.

After being elected as Second Traditional Chief during AVCP’s 51st annual convention, Bea said, “Women were always left out…the men were the leaders. But over the years, there’s been more people, or more ladies, more women getting more active, going into active roles as leaders from the villages. And they’re still silent. But I think being the first one, it will show these other younger generations that they can do it.”

We will miss her and her strong leadership.

From a 2017 Letter of Appreciation to Bea from AVCP’s Executive Board:

January 2023 Healthy Families Workshop. For more information, contact: healthyfamilies@avcp.org or call us at 907-543-8680.